The Listening Project - Alligator - The National 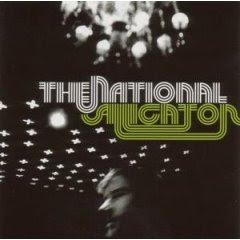 I found The National.  Which is cool because as the time I was dating that guy.  You know, the guy that knows all of the most obscure music, has seen all the bands, really likes Guided By Voices.  It was really intimidating to be that girl, you know, the one that doesn't know jack about music, last went to R.E.M.'s Monster concert, really likes wizard rock.  But The National, I found 'em in this record shop in Holland, MI.  And they're awesome.

Alligator is a good listen.  They aren't a fast sound, but a heavy one.  Even their sad songs (of which there are at least two on this album that I can't listen to with out tearing up, at least, but I'm a sap) have a weight to them.  Live they are surprisingly angry, but this album is a little gentler.

Favorite Track - toss up between "Daughters of the So-Ho Riots" and "Karen"
Least Favorite - Seriously, this is exactly the sort of music I love.  There are no least favorites here.