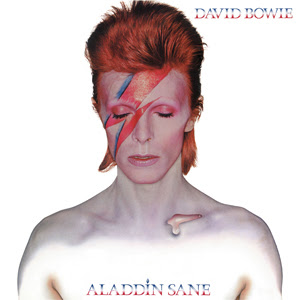 I refuse to believe that there is a single person out there in the universe who doesn't want to make out with David Bowie, particularly in the early 70s, covered-in-glitter, deliciously crazy, David Bowie of Aladdin Sane.

I mean really, it's amazing.

The boys have been less than excited about this listening project ("But Hypatia'sGirl - why would you want to listen to music that sucks?") and were somewhat resistant to participating when I told them that I wanted to listen to the next in my series on the drive up to Ann Arbor. Until they realized it was Bowie. I'm really just in love with this whole album, it's fun, it's playful. It's everything that I love about glam rock and great guitars. And David Bowie's voice.

I have no real great story about this album, aside from my slavering love of David Bowie . . . and how great a glam rock theme party can be!

Favorite Track - "Panic in Detroit."
Least Favorite - I absolutely refuse to try and tease out which I like least.