How I became a protest organizer in two days, and why you should too! 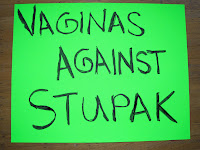 It started simply enough.
I have kind of a reputation as being . . . opinionated?  A staunch, social justice oriented feminist?  Consistently livid about something or other?  Hypatia's Girl is angry after all.
And so it started simply.  A facebook chat message pointing me toward a link on someone's page with the request that I keep it on the radar.  The link was to an announcement that Rep. Bart Stupak was coming to my university to talk about the Great Lakes.  Stupak! In my university!
See, I'm angry about the Stupak-Pitts Amendment.  Deeply, deeply angry.  Much of that stems from coming to the realization that the anti-abortion forces aren't necessarily synonymous with "pro-life."  That is, if their sincere desire were to curb the incidence of abortion they would be doing things other than limiting access to abortion, and other reproductive services.  A sincere, honest and moral goal of reducing the incidence of abortion would be informed by knowledge about why women choose abortion, largely unplanned pregnancy, and what can be done to reduce the numbers of unplanned pregnancies.  See, reducing the numbers of unplanned and unwanted pregnancies would, almost by definition, reduce the number of abortions.  So genuine, sincere, honest, moral pro-lifers do not spend their time trying to limit women's access to reproductive health options, they instead work to increase people's access to contraception, sexuality education, rape prevention and they try to better the situation of women and ease the burden that motherhood very really represents for a woman.  The latter approach shows a genuine concern and empathy for women as actual human beings.  The Stupak-Pitts Amendment is a petulant example of the overt misogyny that has characterized (Sen. John Kyl, I'm looking at you) the entirety of the health care reform conversation.  It is an insincere and uninformed platitude toward the minority of the country who do not believe that women are people.  But more on that later.  In short, I was angry.
And so I thought, you know what, Stupak has a lot to answer for, and I bet I'm not the only one who has questions about this amendment he and his little friends in the House have attached to my health care reform (!).  So I reposted the link.
And then I thought some more.  Facebook is a fantastically flexible medium.  You can do all sorts of things on Facebook.  Like create events.  And so I started an event page, initially just dispersing it to my local friends, a little community action is always a good time.
Initially the invites were limited, no more than 20 of my nearest and dearest (although primarily nearest geographically) friends.  However, there are all sorts of groups and organizations on the Facebook, populated by people who are empathetic and concerned, sincere, ethical, good people.  And they took the event and reposted it, and invited their friends, and so on and so forth.
We, combined, invited something like 140 people.  That felt good.  Clearly, they were not all going to come, however perhaps 30 people were people I knew.
And since there are these lovely organizations and groups on the Facebook, when I realized that it could potentially be larger than just the Phil Dept and some Ann Arbor friends hanging out with some crudely drawn signs, awkwardly in the College of Law, but instead real live strangers could be there, I decided to ask for help, a little guidance.
I really needed the help when I realized that I could get media coverage.  Some nice concise talking points.  So I asked for help from the local Planned Parenthood (please give them lots and lots of money), and got the help I needed.  Did you know that anyone can just write up a press release and email it to a news organization?  Or just call up a local news organization and say - "hey, um, I just wanted to let you know that there is going to be a protest at the College of Law tomorrow at 8am, opposing Stupak."  There are people sitting at news organizations right now just waiting for you to call them.  This is amazing.
And then I just posted the event everywhere on the Facebook I could think of.  And harassed like-thinking friends into doing the same.  And made signs.
And then I went to soccer and was up far later than I intended.  And tried to sleep.

There is something thrilling about walking into a building, seeing people you don't know, standing there with signs.  All because you all agree that something needs to be done, and someone needs to have some answers ready.  It's really, really cool.

And I wander into the building and am greeted by lovely women and men with signs and stickers and flyers and t-shirts.  And we organize ourselves near the entrance to the conference, where Stupak will shortly be speaking.  The director of conference very nicely approaches us to find out what our plans are, and I do my best to reassure him that, seriously dude, I'm from MI, I want the nice conference on Great Lakes water issues to go well.  However, Stupak needs to be confronted by the terrible things he's done.  We just want to hold our nice signs, hand out some information, and ask a question or two, if that's cool.  And it was.  And then the TV cameras showed up.  And I found myself giving a couple of interviews, trying to stay clear and coherent, hit the hightlights, speak in soundbites.  You know, behave well.

The middle bit of the protest I missed, because just as Stupak started talking and some of us went into the room, I had to duck out and run off to teach a quick class on feminism, then it was right back to stand in for the Q&A (we got one question off, and about a half an answer back).

What I really want to stress in this post is a: people are wonderful, wonderful beings.  Very helpful and caring.  People out there do care.  And we can use our social media, the vast amount of technology that we (privileged ones) can take for granted, to bring us together.  And b: you can organize a protest very quickly.  Mostly because of (a).  And if you can, and it's a cause you care about, do it. 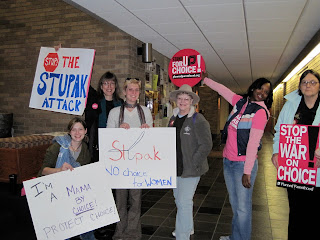 Posted by Hypatia'sGirl at 3:36 PM